Margaret’s father died of a brain tumour when she was just 14 months old, a fact that has shaped her attitude to life and death. She recalls being told that her dad had had a bad headache and the doctors could not help him so he had gone to Jesus to make him better.  This felt right to her. So, she explains, she has never been afraid of death, something which she has used to help others facing loss.

Her religious and spiritual life has been split between different places of worship.  Her mother came from a farming family in Wales and she was bought up as a Welsh Presbyterian.  She grew up in Liverpool but surrounded by some of her Welsh cultural heritage and learned her prayers in both English and Welsh.  Despite the fact she loved belonging to that community she began to be drawn to the Church of England which seemed more open and better suited to her personality.

One day in 1983 she woke up and thought, “I’ll go to church today rather than the chapel.”  She went to a nearby church, St. Luke’s, and was made to feel very welcome.  She looked at their newsletter that day and saw an invitation to get involved with bell ringing at the church, something she’d really wanted to try.  “God’s in this,” she thought and that was the start of her relationship with St. Luke’s. She wanted to become more heavily involved with the church and experienced a call to ordination, specifically to the ministry of end-of-life care and communion.  However, she discovered to her chagrin that, as a woman in her 50s, she was considered too old to train to be a priest, so she became a lay reader. 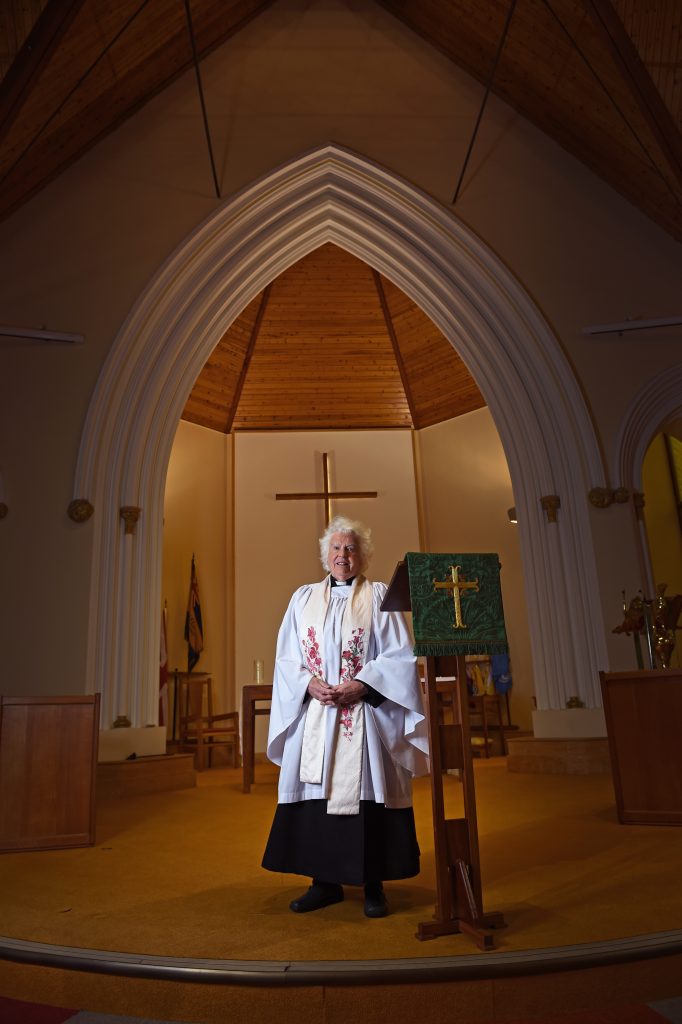 This vocation has threaded through her life. Following the Hillsborough disaster, where hundreds of Liverpool football fans were tragically killed and injured she quickly got involved working on a church helpline supporting people dealing with immense loss.  She also worked as a chaplain at Walton Hospital for five years.  The hospital was connected to Bangor and it was a relief for the many Welsh patients to converse with Margaret in their native tongue.

After the maximum age rules changed for becoming a minister Margaret was finally able to become ordained just before she turned 70.  She was at that point only a month younger than the expected retirement age for clergy.

Now, aged 92, she is still taking the services.

“It’s been a wonderful 20 years.  I’ve enjoyed every minute of it.

“I’m a bit skeptical when I hear people say they can’t do X, Y or Z ‘at my age’ – and there may be a physical reason why not, which is sad and limiting, but there can be a danger of living to a sort of imposed ‘limit line’ based on age, which I do not recognise and have no wish to hear about.

“God has given me this health and strength, and while He continues to do so I shall give thanks and continue to benefit from his gifts.”

“Through Their Time, Laura Page, Photographer and Rebecca Vassie Memorial award winner, has captured the lives of older people during the pandemic, setting out to challenge the perceptions of ageing. Over the next few weeks, we will be sharing the intricate stories captured throughout the past year. So keep an eye out on STOPageism and across our social channels!

To learn more about Laura, her perception of ageing and ageism, and to discover more about Their Time, click here.”

A huge thank you for registering below and helping to STOPageism. We can’t do this without you.

Be a Partner of it

If you’d like your organisation to be a STOPageism Partner, get in touch today.